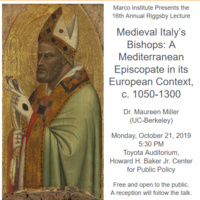 This year’s Riggsby lecturer explores a distinctive aspect of the medieval Italian church: its extraordinarily high number of bishops. Professor Maureen Miller (UC-Berkeley) will sketch the distribution of bishops across the peninsula, the historical circumstances that yielded this plethora of prelates, and the vast differences in resources they had to carry out their pastoral duties. She will then turn to the ramifications of these conditions. How did this abundance of bishops influence the quality and character of pastoral care, the institutions of local churches, and the kinds of men who became diocesan leaders? Throughout the lecture, Miller will explore differences between northern and southern Italy as well as relations with the increasingly powerful bishop of Rome, the pope.

Maureen Miller is a professor of history at the University of California, Berkeley. Her research examines the capacity of individuals and societies for change during the social, economic, political, and cultural transformations of Europe during the eleventh and twelfth centuries. She has a particular interest in movements for reform during this period, as well as in the development of institutions, social relations, urban landscapes, and cultures of medieval Italian cities.