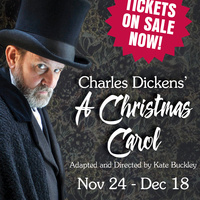 With a wonderful new adaptation and stunning new costumes, set, and cast, the heartwarming “A Christmas Carol,” returns live to the Clarence Brown MainStage November 24 to December 18, 2021.

“We are thrilled that – after such a long time apart – we are opening our season with this classic tale of love and redemption,” said Kate Buckley, director, adaptor and CBT interim artistic director.

$10 tickets for children ages 5 – 12 can only be purchased by calling the Box Office at 865-974-5161. UT Faculty/Staff receive 20% off ticket prices.  Students see the previews for FREE and the rest of the performances for $5, excluding Opening Night. Don’t get scammed! The Clarence Brown Theatre only sells tickets through Knoxvilletickets.com or by phone at the CBT Box Office at (865) 974-5161.

General admission seating scaled to ensure patron spacing will be in effect for this production.  Masks also are required. View a complete listing of our safety protocols here.

In this year’s “A Christmas Carol,” the story is the same. But, the production is different!

“This is a more intimate production which focuses on the language of Dickens, inventive theatricality, and the actions of the ensemble to move the story forward,” Buckley said.

The set will be very different from last year’s large-scale version. The usual large, rolling set pieces will be replaced with a beautiful giant picture frame through which several images will be projected, along with familiar furniture, gorgeous hanging lanterns, and signs.

An ensemble of nine actors will play all the roles — including the children! The cast is comprised of CBT professional actors, MFA acting students and one recent undergraduate actor. Scrooge will be portrayed by David Brian Alley, who has been seen in various roles in past productions.

“Ninety percent of the language is taken from Dickens’ classic novella, some of which you may not have heard previously on our stage,” Buckley said.

Kate Buckley (Director and Adaptor) As a Professor of Theatre at the University of Tennessee, Ms. Buckley has directed 15 productions for the Clarence Brown Theatre. Other regional theatre credits include: The Goodman Theatre, Oregon Shakespeare Festival, Milwaukee Repertory Theatre, Utah Shakespeare Festival, American Players Theatre, Kansas City Repertory, and Chicago Shakespeare Theatre. International Credits Include: The National Theatre of Slovakia; Colla Marionette Company, Milan, Italy. Ms. Buckley was a founding member of Chicago Shakespeare Theatre and served as the Artistic Director of The Next Theatre in Evanston, Illinois. She has been a guest lecturer on Shakespeare at universities and arts organizations nationally and abroad. She received a Joseph Jefferson award for Best Director, four Chicago After Dark Awards for Outstanding Direction and her productions have won four consecutive Jefferson Awards for Best Ensemble. She has received a Distinguished Alumni Award from Aurora University, a Creative Achievement/Research Award, and the Paul Soper Professorship from the University of Tennessee.

Terry D. Alford (Musical Director) is a Distinguished Lecturer in Theatre and teaches Musical Theatre Performance and Honor’s Introduction to the Theatre and Acting. He earned his BA and MFA in theatre from The University of Tennessee. Terry is a member of the Clarence Brown Professional Company and regularly directs and musically directs for the Clarence Brown Theatre. Favorite CBT directing credits include “South Pacific,” “A Shayna Maidel,” “The Real Inspector Hound,” “The 25th Annual Putnam County Spelling Bee,” among others. He has worked professionally as a performer, director, musical director, and composer at theaters across the country and has created the scores for four original musicals and a variety of chamber and vocal music pieces. Terry also directs or musically directs shows locally with the Flying Anvil Theatre and the Knoxville Children’s Theatre.

David Brian Alley (Ebenezer Scrooge) first became a CBT Company member in the Fall of 2000.  Most recently he was seen in the Spring of 2020 as Polonius in “Hamlet,” and he is beyond thrilled to finally be back to performing for CBT audiences after our long “hiatus.” In addition to playing the roles of Jacob Marley and Bob Cratchit in past productions of “A Christmas Carol,” David also has appeared in several Clarence Brown Theatre productions through the years.  He also has performed regionally and has many film credits.