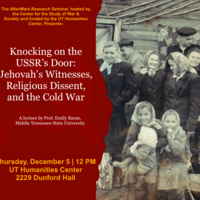 Jehovah's Witnesses are best known for their door-to-door evangelism. In the Soviet Union, the Witnesses' apocalyptic beliefs and rejection of secular society further propelled them into conflict with the Soviet state. Yet despite fierce persecution, Soviet Witnesses found ways to test the boundaries of state control. In fact, the Witnesses, a rural, religious community, ran one of the largest and most complex underground organizations in the postwar Soviet Union. This talk will shed light on this often misunderstood religious community and what it has to tell us about religious dissent during the Cold War era.

Center for the Study of War & Society