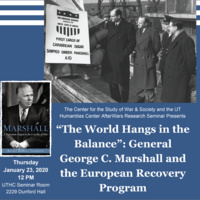 This AfterWars Seminar covers the role of George C. Marshall in the development of the European Recovery Program (1949-1952), better known as the Marshall Plan, that led to the recovery of economic, social, and democratic institutions in Europe at the end of World War II. Called the most successful United States government program in history, it laid the groundwork for the integration of Western Europe and is considered the forerunner of the European Union. With more than sixty archival photographs, Mrs. Thompson acquaints the listener with the unique features of this visionary plan, its implementation, and in what ways Marshall, as Secretary of State, shaped its key concepts, and secured its passage through the United States Congress.

Rachel Yarnell Thompson is the Marshall historian at The George C. Marshall International Center, located on the site of Marshall’s museum home in Leesburg, Virginia. In 2014, the Center published Ms. Thompson’s full-length biography, Marshall: A Statesman Shaped in the Crucible of War. She lectures extensively on various aspects of Marshall’s illustrious career as soldier and statesman.

Department
Humanities Center, Center for the Study of War and Society
Contact Name

Center for the Study of War and Society