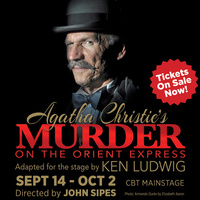 Unfortunately, due to illness, the run of this show is cancelled.

Tickets may be purchased by calling the Box Office at 865-974-5161 or online. UT Faculty/Staff receive 15% off ticket prices.  Students see the previews for FREE, the rest of the performances for $5, and Opening Night for $10.

The production is sponsored by Pilot Company, Liz and Wes Stowers, The Schubert Foundation, Arts & Culture Alliance, Knox County Tourism Consortium, City of Knoxville, Knox County Tennessee, and The Department of the Treasury. Media sponsors are Knoxville News Sentinel, WUOT, and WUTK.  Free and convenient parking is available in the Upper Parking of McClung Tower Garage (G2) on Volunteer Boulevard.

The production contains all the glamour, intrigue, and suspense of Christie’s novel, with a healthy dose of humor to quicken the pace.  Just after midnight, a snowdrift stops the Orient Express in its tracks.  The luxurious train is surprisingly full for the time of year, but by morning there is one less passenger.  An American tycoon lies dead in his compartment, stabbed numerous times, his door locked from the inside.   Isolated and with a killer in their midst, the passengers rely on detective Hercule Poirot to identify the murderer – before he or she can strike again.

Agatha Christie (1890-1976) is the author not only of the longest running stage production in history, but also “Witness for the Prosecution” and “And Then There Were None,” to name but a few of her greatest stage successes. Her novels have sold more than 2 billion copies around the world, and she is only outsold by the Bible and Shakespeare.

Adaptor Ken Ludwig has had six shows on Broadway, seven in London's West End, and many of his works have become a standard part of the American repertoire. His 28 plays and musicals have been performed in over 30 countries in more than 20 languages and are produced throughout the United States every night of the year.

Terry D. Alford (Musical Director) is a Distinguished Lecturer in Theatre and teaches Musical Theatre Performance and Honor’s Introduction to the Theatre and Acting. He earned his BA and MFA in theatre from The University of Tennessee. Terry is a member of the Clarence Brown Professional Company and regularly directs and musically directs for the Clarence Brown Theatre. Favorite CBT directing credits include “South Pacific,” “A Shayna Maidel,” “The Real Inspector Hound,” “The 25th Annual Putnam County Spelling Bee,” among others. He has worked professionally as a performer, director, musical director, and composer at theaters across the country and has created the scores for four original musicals and a variety of chamber and vocal music pieces. Terry also directs or musically directs shows locally with the Flying Anvil Theatre and the Knoxville Children’s Theatre.

With a dual mission to train the next generation of theatre artists and to provide top quality theatre, the Clarence Brown Theatre is a professional theater in residence at the University of Tennessee.  Under the leadership of CBT Producing Artistic Director and UT Theatre Department Head, Kenneth J. Martin, and Managing Director, Thomas Cervone, the CBT season runs from August through May and features six productions ranging from musicals to drama.

The CBT provides a cultural resource for both the University and the larger East Tennessee community and affirms diversity and inclusivity in all their forms.