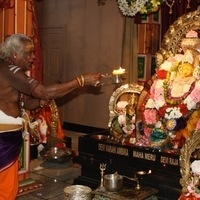 This talk explores the dynamics of a North American Hindu goddess temple, the Parashakthi Temple, located in Pontiac, Michigan. Originally founded in October of 1999, this temple serves the Hindu goddess in her form as Karumariamman, “black Mariamman,” a South Indian village goddess. The talk will explore ways the Parashakthi Temple’s discursive and ritual practices fashion a type of religiosity that roots itself in Indian Hindu goddess traditions but recreates such traditions to suit the temple’s American context. The goddess and her home in Pontiac exemplify the larger types of exchanges and transformations across borders and boundaries that occur in many people’s lives in the contemporary world.

Tracy Pintchman is a professor of religious studies and director of the Global Studies Program at Loyola University of Chicago.  Her research interests include Hindu goddess traditions, women and religion, and transnational Hinduism.  Her scholarly publications include more than two dozen articles and book chapters as well as five edited and coedited volumes and two monographs, The Rise of the Goddess in the Hindu Tradition (1994) and Guests at God's Wedding:  Celebrating Kartik Among the Women of Benares(2005). Her current monograph, Goddess Beyond Boundaries: Worshipping the Eternal Mother at a North American Hindu Temple, is in process and under contract with Oxford University Press.

Register for the webinar by using this link.