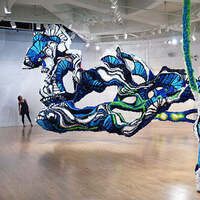 Her notable commissions include an installation for the internationally recognized band The Flaming Lips; a winter escape installation for the Get Animated Invasion pop-up exhibit with Warner Bros at the GRAMMY Museum; a large-scale installation piece for NIKE, presented in the Shrine Auditorium for The KOBE X Blackout Experience; and two installations for Viacom, one of which is a 117-foot piece at their headquarters in Times Square. It was featured by the New York Times and was broadcast on national television on VH1's Top 20 Countdown and the United States Embassy. Most recently, she created a site-specific work on the facade of Château de Belcastel in Aveyron, France.

Wagner will return to campus to work on a project in the printmaking studio with the assistance of students. She will give a public lecture on her work at 7:30 p.m. Thursday, October 10 in the McCarty Auditorium of Art + Architecture.

Wagner’s work has been featured international publications including The New York Times, Architectural Digest, and Art & Science Journal. She was the recipient of an Awesome Without Borders, Awesome Foundation Art Grant and the Sculpture and Installation Category Award Winner of the SEE.ME, Art Takes Paris, international art competition. In 2015, she was awarded a highly coveted Pollock-Krasner Grant.

Wagner has upcoming one-person exhibitions at Galerie Openspace, in Paris, France, the Art on Paper Fair in New York City, and at Hashimoto Contemporary, her gallery in San Francisco. She will be a part of a curated group exhibition at the David Bloch Gallery in Marrakesh, Morocco.