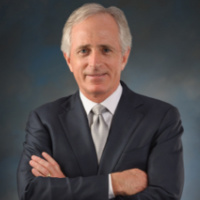 Please join the Howard Baker Center in welcoming Senator Bob Corker for the Baker Distinguished Lecture Series. The Baker Distinguished Lecture Series (BDLS) was established in 2012 to recognize the contributions of notable individuals and promote the values of Senator Howard H. Baker, Jr., whose longstanding commitment to honorable public service has made an indelible mark on US history. The BDLS serves as a biannual forum in which guest speakers of national prominence are invited to speak on matters relevant in today’s society.

Bob Corker is a successful businessman, former United States Senator, and was previously named one of the 100 most influential people in the world by TIME Magazine. Corker represented Tennesseans in the Senate from 2007-2018, where he served as chairman of the Senate Foreign Relations Committee and was an active member of the Senate Banking Committee and Senate Budget Committee.

He was Tennessee’s commissioner of finance and mayor of Chattanooga before being elected to the Senate, but he spent most of his life in business. It’s that results-driven businessman’s perspective that allowed him to make a mark during his Senate tenure and become a national and global thought leader on fiscal, financial, and foreign policy issues. Corker graduated from the University of Tennessee in 1974 with a degree in Industrial Management. He and his wife of 32 years, Elizabeth, call Chattanooga home.

This event is free and open to the public. Guests may park in the Vol Hall Garage on White Avenue at no charge by requesting a parking voucher from Baker Center staff at the event.