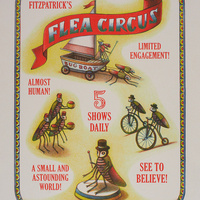 Beauvais Lyons to Exhibit “Selections from Circus Orbis” in Gallery 103

“Selections from Circus Orbis”, an exhibition curated by Beauvais Lyons, director of the Hokes Archives, will be on display at Gallery 103 with an opening reception 5-7 p.m. Sunday, February 24.  Exhibition dates: February 19—March 9, 2019.

Circus Orbis was a regional circus based in Jacksboro, Tennessee, that performed in the American South and Midwest in the early 20th century. Unlike better-known circuses of the day, Circus Orbis toured in only ten train cars, had a cast of thirty performers, and a small menagerie consisting of domestic animals and costumed performers dressed as various anthropomorphic creatures. The founder of the circus, Thaddeus Evergood, spent a year in Rome in 1908 where he was a street performer and found inspiration from the city’s art and architecture. The design of Circus Orbis was informed by ancient Roman and Baroque art, as well as the trompe l’oeil frescos from the Villa Farnesina.  This small exhibition presents a selection of graphic works used to promote the circus, some surviving printed ephemera, as well as a facsimile of one of the sideshow banners. Circus Orbis discontinued in 1929 when the “Splendorium,” a tented “Show Palace,” was destroyed in a fire. One of the best accounts of the circus may be found in Thaddeus Evergood’s memoir, Popcorn & Peanuts, published in 1933.