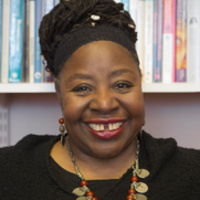 "Calling In The Calling Out Culture" with Loretta Ross

Athough there are different views of the purpose of "cancel culture" ranging from accountability to censorship (Pew Research Center 2021), Merriam Webster Dictionary defines it as "the practice or tendency of engaging in mass canceling as a way of expressing disapproval and exerting social pressure." For this keynote lecture Lorreta Ross, Author and Professor at Smith College, will challenge the idea of calling in, versus calling out others with whom one disagrees, or statements, views, or ideas someone finds objectionable. According to Ross, "Calling out assumes the worst. Calling in involves conversation, compassion, and context." The event is free and open to the public.

This event is being hosted by the Division of Diversity and Engagement. This event is also part of the University's Fall 2022 Listen. Learn. Lead Week that was inspired by Senator Baker's observation that the key to leadership was to be an "eloquent listener." The week, held each semester, is intended to provide faculty, staff, students, and the public with the opportunity to engage in diverse viewpoints about pressing topics. This semester's theme is "Voting Education & Civic Engagement." The week is from Monday, September 19 to Saturday, September 24. The week is a partnership between the Provost's Office, Division of Student Life, Division of Diversity and Engagement, and the Howard H. Baker Jr. Center for Public Policy.

This event will be held on Friday, September 23, from 5:00 to 7:00 pm in the Toyota Auditorium at the Howard H. Baker Jr. Center for Public Policy (1640 Cumberland Avenue, Knoxville, TN). Parking in the White Avenue Parking Garage (1621 White Avenue) can be validated at the venue.

Ross is a Professor at Smith College in the Program for the Study of Women and Gender where she teaches courses on white supremacy, human rights, and calling in the calling out culture. She was the National Coordinator of the SisterSong Women of Color Reproductive Justice Collective (2005-2012) and co-created the theory of Reproductive Justice. Loretta was National Co-Director of April 25, 2004, March for Women’s Lives in Washington D.C., the largest protest march in U.S. history at that time. She founded the National Center for Human Rights Education (NCHRE) in Atlanta, Georgia, launched the Women of Color Program for the National Organization for Women (NOW), and was the national program director of the National Black Women’s Health Project. One of the first African American women to direct a rape crisis center, Ross was the third Executive Director of the D.C. Rape Crisis Center.