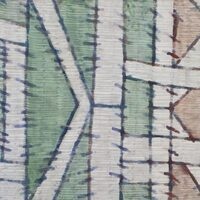 Carl Sublett: A Centennial Celebration opens the first Friday in June at the UT Downtown Gallery. The exhibition features works from the Ewing Gallery permanent collection and from the private collections of local residents.

Carl Cecil Sublett was born on February 4, 1919, in Johnson County, KY, the only child of Mr. and Mrs. Tandy Taylor and Beaula Fitzpatrick Sublett. In 1923 the family moved from their small farm to the mining town of Lackey, where the coal trains fascinated young Carl and became the first subjects of his drawings. He attended Western Kentucky State College from 1938 to 1940 in Bowling Green, KY.

In 1941, at the onset of World War II, Sublett decided to go into defense work, enrolled in a course at Mayo Vocational School in Paintsville, KY, and became a machine operator. He went to Hartford, CT, for a job at Pratt & Whitney Co. as a lathe operator. There, he met fellow plant employee Helen Davis, from Port Clyde, Maine. They were married in 1942.

Sublett was called to serve in the military and joined the U.S. Army. He served in the infantry as a sergeant in the 85th Division of the 5th Army in Italy. During the war some of his camp sketches were printed in the division newspaper and some made their way home in V-mail. After hostilities ceased, Sublett entered the University Study Center in Florence, Italy, and received the Citizens Award for his artwork by the people of Florence.

He returned to the United States to live in Bristol, TN, and worked as an engineering draftsman, as a newspaper artist, as artist and assistant manager of an engraving firm, and as a freelance artist, continuing his own painting at all hours. His daughter, Carol, and son, Eric, were born in 1948 and 1951, respectively.

In 1954, Sublett moved his small family to Knoxville to take a position as art director for Charles S. Kane Co., advertisers. He enrolled in evening painting classes at the University of Tennessee with C. Kermit Ewing and soon was hired to assist Ewing in teaching. He had a solo show at the Audigier Gallery at the University of Tennessee in 1957-58, and received special mention in watercolor at the Southeastern Annual. He exhibited in the Mid-South Annual in Memphis, TN, and the State Arts Festival, Nashville, TN, and received awards in each. In 1959-60 he was chosen for a solo show at the Mint Museum, Charlotte, NC, was included in the Pennsylvania Academy’s 15th Annual, and paired with Walter H. Stevens for a two-person exhibition at the University of Kentucky Art Gallery, Lexington, KY.

These years are marked by a frenetic pace, with Sublett exhibiting at every venue available and winning many awards and prizes. He became a founding member of the art group “The Knoxville Seven”, and won the Mead Corporation Painting of the Year, Atlanta, GA, and 1st Prize Watercolor Society of Alabama Annual. He won the Grumbacher Purchase Award and traveling exhibition from Watercolor U.S.A., Springfield, MO in 1965. In 1966, his work was chosen to represent the State of Tennessee in the Governor’s National Circuit Exhibition, and was included in the International Festival of Fine Art, Hartford, CT. The same year, he became a full-time assistant professor of painting at the University of Tennessee, Knoxville.

In 1969, Sublett was included in the ongoing Art in U.S. Embassies Program. More awards in the next decade culminated in his election to the National Academy of Design, NY in 1976. The same year, he was made full professor at the University of Tennessee. In the following years he participated in retrospectives and invitational exhibits, a solo show in Bern, Switzerland, and a major solo exhibit at the Tennessee State Museum, Nashville, TN, and an American Watercolor Exhibition at the Taipei Fine Arts Museum in Taiwan. Sublett was a panelist for the Symposium: Images and Icons in Contemporary Watercolor Painting, Spring Green, WI, sponsored by the Watercolor U.S.A. Honor Society, and a juror in many regional competitions.

In 1982 he retired from teaching, and in 1984 opened the Sublett Gallery in the 11 Street Artist’s Colony at the site of the 1982 World’s Fair in Knoxville, TN. This was a venue for Sublett and many other artists for the next five years. In 1991, The Unseen Carl Sublett was the first exhibit at the new Knoxville Museum of Art, and in 1994 he received a lifetime achievement award from the Knoxville Arts Council.

A Visual Odyssey: The Art of Carl Sublett with an eponymous catalog was an award from the University of Tennessee, opening at the Ewing Gallery and traveling from 2000 to 2002. A solo exhibit courtesy of the Hampton Gallery, Taylors, SC, was held at the Greenville County Museum of Art, Greenville, SC, in 2002-2003. A second Sublett Gallery was opened in Union, Maine, in 2006.

Sublett died in 2008, and a posthumous exhibit, Image Tracks, was held that summer at the UT Downtown Gallery in Knoxville and at The Mars Hall Gallery, Tenants Harbor, Maine.

View a timeline of Carl Sublett’s life and career.