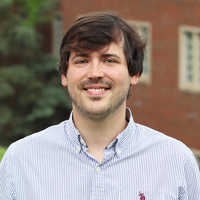 Title: "Confinement Effects in Self Assembly of Functional Block Copolymers"

Abstract
Since their advent nearly seventy years ago, block copolymers have proven an incredibly versatile class of materials and have found their way into everything from common plastics to advanced materials as their architectures and chemistries can be tailored to a given application. In large part this versatility is due to the ability of block copolymers to self-assemble into nano-scale structures. My own work has focused on the self-assembly behavior of block copolymers that contain functional blocks (polyelectrolytes, organic semiconductors), primarily to better understand the bulk and interfacial structures that form in these materials, but also to understand how the self-assembled structures themselves impact properties such as ion transport. This seminar will discuss two of these projects.

The first project investigated the impact of the competing forces of crystallization and self-assembly on the structure in conjugated-amorphous block copolymers. In many such systems, the strong drive for crystallization in the conjugated block leads to the destruction of the self-assembled morphology that is sought from a block copolymer. Using in situ simultaneous small- and wide-angle X-ray scattering (SAXS and WAXS) experiments to observe the self-assembled morphology during crystal growth, it was demonstrated that for a series of lamellar and cylinder-forming diblock copolymers based on poly(3-dodecylthiophene) (P3DDT) and poly(2-vinylpyridine) (P2VP) the crystallization mode could be tuned as a function of regioregularity of the P3DDT block. While lamellar structure was preserved even at very high regioregularity, the cylinder morphology was shown to be incompatible with high regioregularity but was retained for less regioregular materials.

The second project investigated the impact of surface-induced order on ion transport in block copolymer electrolytes. These materials often exhibit an anisotropy in ionic conductivity, with the through-plane conductivity significantly lower than the in-plane. This anisotropy poses a problem for many applications such as batteries or fuels cells, both of which rely of efficient through-plane ion transport. To determine the source of this anisotropy, the structure and ion transport properties of a series of lamellar block copolymers of polystyrene (PS) and poly(1-(2-acryloyloxyethyl)-3-butylimidazolium bis(trifluoromethanesulfonyl)imide) (PIL) were studied. By using SAXS and grazing-incidence SAXS (GISAXS) to compare the morphologies adopted in both thick (50-100 μm) and thin (100-400 nm) films, we proposed that thick films have a mixed structure comprised of randomly oriented lamellae in the bulk and highly oriented lamellae at the interfaces. When the conductivities of thick films were measured in the through-plane and in-plane directions, a more than twenty-fold decrease in the conductivity was observed in the through plane direction as compared to the in-plane, consistent with the mixed structure. This study demonstrated the critical role of surface interactions on the performance of block copolymer electrolytes and the importance of controlling surface interactions for applications that depend on through-film transport.

Bio
Jonathan Coote received his BSE in Chemical Engineering from Tulane University in 2013. After graduation, he went to work for EDG, Inc. in the Asset Management and Optimization group building and testing oil field models used to forecast client production. In the summer of 2015 he returned to Tulane, where as a research assistant in the Shantz research group he spent a year studying SSZ-39 zeolite growth kinetics and synthesis of bismuth oxyhalides for use as a photocatalyst. He joined the Department of Chemical and Biomolecular Engineering at UT in the fall of 2016. His current research with the Stein and Sangoro research groups on confinement effects in self-assembly of functional block copolymers.