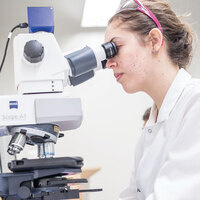 Radiopharmaceuticals are drugs containing a radioactive atom in their structure. Depending on their mode of radioactive decay, they are used for either diagnostic imaging or radiotherapy. Penetrating radiation (e.g., g rays) is used for imaging since it can be detected outside of the body. Particulate radiation (e.g., a or b-) is used for cell destruction because of the very short penetration ranges in tissue. It turns out that the majority of radionuclides with nuclear properties suitable for either imaging or radiotherapy are metals. For example, 99mTc (6 h half-life, 140 keV g emission) is the most widely used radionuclide for diagnostic imaging, and accounts for >80% of nuclear medicine scans performed. Lutetium-177 (6.6 d half-life, 0.5 MeV b- emission) is an example of a therapeutic radionuclide. The University of Missouri is home to the largest university research reactor in the country (MURR), and a variety of radionuclides are produced that are utilized in medicine, biology, industry, and other fields. Additionally, a 16 MeV PETtrace cyclotron at MURR is available for production of proton-rich radionuclides such as 18F (109 min half-life, 0.63 MeV b+ emission) that is used for PET (positron emission tomography) imaging. The history of radiopharmaceuticals will be discussed, and the development and utilization of arsenic radioisotopes (72As and 77As), their chelates, and their bioconjugates for potentially targeting imaging and radiotherapy of cancer will be presented.

Silvia S. Jurisson, University of Missouri is a professor of Chemistry and Radiology, and senior research scientist at the University of Missouri Research Reactor (MURR). She has been involved in inorganic and radiochemistry research with applications to radioisotope production and separations, radiopharmaceutical chemistry, radio environmental chemistry, and biological systems. She is involved in radionuclide production and separations to make high specific activity radionuclides available for imaging and/or radiotherapy applications and in chelate syntheses for radiometals. She serves on the editorial boards of Nuclear Medicine and Biology and the Journal of Nuclear and Radioanalytical Chemistry and is an Associate Editor of Radiochimica Acta. She received the John H Hubbell Award from Elsevier in 2018, the TERACHEM Award in 2018, the Glenn T. Seaborg Award for Nuclear Chemistry from the American Chemical Society in 2012, the College of Arts & Science Purple Chalk Teaching Award in 2013, the Fuldner Chemistry Fellow Award in 2013, 2014 and 2017, and received the Gold Chalk Award from the Graduate School in 2017. She was elected as a Fellow of the American Association for the Advancement of Science in 2014, and a Fellow of the American Chemical Society in 2016.