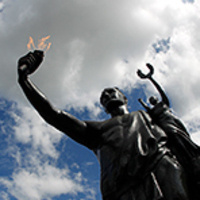 Civil Rights from the Perspective of a Sharecropper's Son: An Evening with John O. Hodges

As the son of sharecroppers in the Mississippi Delta town of Greenwood, John O. Hodges discusses his struggle to get an education in the segregated school system and his involvement, as a child soldier, with the Civil Rights Movement of the early 1960s.  He was eleven when fourteen-year-old Emmett Till was assassinated in 1955 in Money, just about 10 miles from his doorstep in Greenwood.  Earlier that year, the Rev. George Lee was murdered for his work to help get Blacks in Mississippi registered to vote.  As a teenager, he worked alongside Medgar Evers, the Field Secretary of the NAACP, who was assassinated in 1963.  He was arrested in Ruleville when Fannie Lou Hamer attempted to vote.  He traveled throughout the Delta during the summer of 1962 with Bob Moses and Sam Block campaigning for Black voting rights.  Hodges sees parallels between literacy tests, poll taxes, and forms of intimidation during the 1960s to deny Blacks the right to vote and efforts at voter suppression in our own time.

So grateful to meet Dr. Hodges and to learn from his experiences.