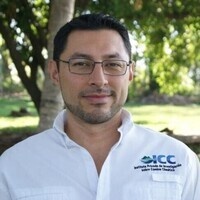 Climate, vulnerability and disasters in Central America: a geographical perspective

Biography: Alex Guerra has been the General Director of the Climate Change Research Institute in Guatemala since 2010. He holds a Master’s in Water Science, Policy and Management and a PhD in Geography and the Environment, both from the University of Oxford, UK. Alex was a lecturer at a master’s program at the Del Valle University in Guatemala from 2012 to 2017. Previously he worked as a researcher in water resources at the Sierra de las Minas Biosphere Reserve. He is a Young Affiliate Member of TWAS LACREP 2018, and a member of the National Academy of Medical, Physical and Natural Sciences of Guatemala since 2015. He is author or co-author of several publications on disaster risk, water resources and climate change mitigation and adaptation. In the past two years, he has been the chair of the Guatemalan National Science System on Climate Change (SGCCC).

Abstract: Humans have inhabited Central America for thousands of years. Its geographical location determines highly diverse geological and climatic conditions that make it a biodiversity hotspot. However, a vast range of hazards from hurricanes and tropical storms, to landslides, floods, droughts, to earthquakes and volcanic eruptions have repeatedly impacted the region. The socioeconomic and political conditions contribute to high levels of exposure and vulnerability. One of the results is that Central America is one of the most vulnerable regions to effects of climate change. Understanding the root causes, dynamics and current trends is key to addressing issues such as poverty and migration. This talk will look into this from a geographical perspective and will include examples of local day-to-day challenges as well as actions undertaken by different sectors of society to tackle them, particularly in Guatemala and El Salvador.