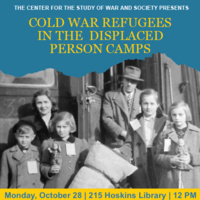 The first steps of East-European refugees in the free world brought these people into the displaced persons camps in Western occupation zones of Germany and Austria and in Italy. More than 20 million people in Europe were out of their home countries by the end of World War Two. These included former Jewish prisoners in concentration camps, forced laborers returning from Germany, expelled German minorities from Eastern Europe and, above all, people escaping Stalin and his Communist regimes or refusing repatriation behind the Iron curtain. Martin Nekola will discuss these camps, their unique microcosm, and the newly arrived refugees’ lives, as people remained for long months or even years in the camps.

Center for the Study of War and Society