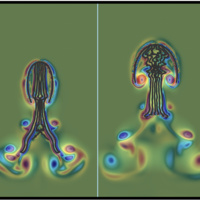 TITLE: Fluid-Structure Interaction for the People!

ABSTRACT: Hearts, jellyfish, seagrass, and all squishy things have something in common - they all involve fluid-structure interactions (FSI). FSI applications are numerous and vital in many fields across science and engineering. While there exist robust methods for investigating FSI, most necessitate the use of complex computer simulations. The knowledge of how to carry out such simulations creates a barrier that has made this traditionally under-utilized and inaccessible by researchers, particularly students. IB2d (“I beg to differ”) is open-source software that was specifically designed to make FSI accessible to the scientific community and student researchers. During this talk, I will highlight some of the inner workings of the software as well as showcase some of the models that were developed by my undergraduate collaborators, involving jellyfish locomotion and biomimetic pumping devices.

BIOSKETCH: Nick did his undergraduate studies in math and physics as well as his masters in applied and computational math at RIT. He went on to earn a PhD in mathematics from the University of North Carolina at Chapel Hill. During this time he participated in a science policy program through the American Association for the Advancement of Science (AAAS), that focused on trying to ensure a safe, sustainable, and equitable clean water future. He is now an assistant professor in the Mathematics and Statistics department at The College of New Jersey, where he works with undergraduate students on a variety of problems in biomechanics using a blend of modeling and computational techniques combined with physical and organismal experiments. Some areas they work on include aquatic locomotion, complex dynamics, opioid epidemics, heart development, and bio-inspired design. Outside of mathematics, Nick enjoys weight-training in his own strongman gym, scuba diving, and eating pizza while watching his favorite scientists - the Ghostbusters.