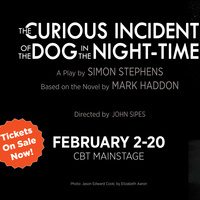 Curious Incident of the Dog in the Night-Time

Christopher, an extraordinary young man, discovers the slain body of his neighbor’s dog.  Determine to find the killer, he embarks on his first-ever excursion, carefully following the evidence wherever it leads him.  His detective work takes the young hero on an exciting journey brimming with adventure and discovery that ultimately transforms his world.   The Broadway hit, “The Curious Incident of the Dog in the Night-Time” will run on the Clarence Brown Theatre mainstage February 2-20, 2022.  The production contains adult language and content and is recommended for 13+.

UT Faculty/Staff receive 20% off ticket prices.  Students see the previews for FREE and the rest of the performances for $5, excluding Opening Night.  Don’t get scammed!  The Clarence Brown Theatre only sells tickets through Knoxvilletickets.com or by phone at the CBT Box Office at (865) 974-5161.

Grant and foundation support for this production is provided by the Tennessee Arts Commission, The Shubert Foundation Inc., the Arts & Culture Alliance, and the Knox County Tourism Consortium.  Media sponsors for this production are Knoxville News Sentinel, WUOT, and WUTK.  Free and convenient parking is available in the Upper Parking of McClung Tower Garage (G2) on Volunteer Boulevard.

Based on the best-selling novel and the winner of five Tony Awards including Best Play, “The Curious Incident of the Dog in the Night-Time” is a powerful play that explores what it truly means to love and be loved.

With a dual mission to train the next generation of theatre artists and to provide top quality professional theatre, the Clarence Brown Theatre at the University of Tennessee Knoxville is one of only 12 academic LORT (League of Resident Theatre) institutions in the nation with a professional theater on campus.  Under the leadership of Interim Producing Artistic Director Kate Buckley, Interim Department Head Casey Sams, and Managing Director Thomas Cervone, the CBT season runs from November through May and features five productions ranging from musicals to drama.

The CBT provides a cultural resource for both the University and the larger East Tennessee community and affirms diversity and inclusivity in all their forms.