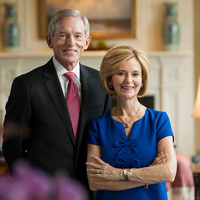 Dedication of Clay and Debbie Jones Center for Leadership and Service

After graduating from UT, Clay Jones served for eight years as a fighter pilot in the US Air Force. He then had a 34-year career with Rockwell International and Rockwell Collins Inc., an aviation electronics and communications equipment company. Jones served in the positions of chairman and CEO of the company for 12 years each.

Jones received his bachelor’s degree with honors in political science and was named a Torchbearer, the highest honor an undergraduate student can receive at the university. He was also involved with Phi Delta Theta, Student Government Association, and Reserve Officers Training Corps.

He continued his involvement after graduation, serving as president of UT’s Alumni Board of Directors and was named a recipient of UT’s Distinguished Alumnus Award.

In 2019, Clay and his wife, Debbie, have made a landmark gift in support of the university’s Center for Leadership and Service. Following their most recent gift, the Board of Trustees voted on March 1 to name the center in their honor.

Read more about the Joneses.

Jones Center for Leadership and Service