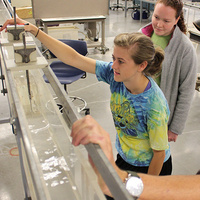 Abstract
The one-dimensional HEC-RAS multi-purpose open channel flow modeling software was successfully used, with ArcMap and HEC-GeoRAS, to simulate flow over the Wappapello Dam limited-use Ogee spillway (Wappapello, Missouri). Initial computational hydraulic modeling results predicted a lake elevation of 132.9 m (405.0 ft) [NAVD 1988] would be required for the resulting floodwaters overtopping the spillway to reach the nearby Wappapello Lake Management Office. An intense rainfall event during 2011 led to the spillway being overtopped for the first time since 1945. Spillway performance during the 2011 event was analyzed afterwards. Results indicated that the spillway crest was not submerged by backwater. A technique was employed which successfully estimated the design energy head of 7.160 m (23.49 ft) for the spillway. Hydraulic modeling developed after the 2011 event incorporated this estimated design energy head, allowing the spillway discharge coefficient to vary with discharge in the course of an unsteady modeling run. Results indicated that, while the spillway did perform as designed, the performance is limited by the shallow approach depth.

Dr. Nail is an Associate Professor in the Engineering Department at the University of Tennessee at Martin where he teaches a variety of undergraduate courses across the Civil and Mechanical Disciplines. His educational background is that of Mechanical Engineering, having earned his undergraduate degree from Auburn University (1984), and his M.S. (1986) and Ph.D. (1991) degrees from Texas A&M University. His educational background in graduate school was centered in Fluid Mechanics, involving analytical, computational, and experimental work.  He was employed as a Research Hydraulic Engineer for the United States Army Corp of Engineers, in the Coastal and Hydraulics Laboratory of the Waterways Experiment Station for eleven years, from 1991-2002. That facility has since been renamed the Vicksburg Site of the Engineer Research and Development Center. He holds a Professional Engineer’s license based on having passed both the Civil and Mechanical discipline specific exams (1998). In 2002 he assumed his current position on faculty at UT Martin, and also appears as a seminar speaker for Half Moon Education. Dr. Nail was married in 1996 and has two teenage children.