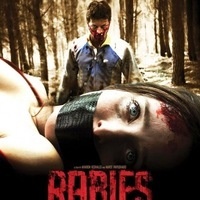 Join us for this horror film screening in advance of our speaker Olga Gershenson who will be giving a lecture on November 4, 2022 on contemporary Israeli horror films. This film Rabies (2010) is the first feature length Israeli horror film. In the film, a brother and sister who run away from home find sanctuary in a deserted nature reserve. When the sister falls into the trap of a psychopathic killer, the brother sets out on a race against time to find help.