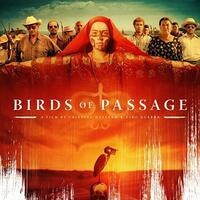 Join us on the first Tuesday of each month for the UT Libraries' Foreign & Independent Film Series. On Oct. 1, we'll feature Birds of Passage, a 2018 Spanish film by directors Cristina Gallego and Ciro Guerra.

"During the marijuana bonanza, a violent decade that saw the origins of drug trafficking in Colombia, Rapayet and his indigenous family get involved in a war to control the business that ends up destroying their lives and their culture."