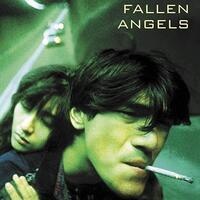 Join us on the first Tuesday of each month for our Foreign and Independent Film series.

On Sept. 3, we'll feature Fallen Angels, a 1995 Chinese film by director Wong Kar-Wai. "Set in the neon-washed underworld of present-day Hong Kong, Fallen Angels intertwines exhilarating tales of love and isolation, primarily the unconsummated love affair between a contract Killer (Leon Lai Ming) and the ravishing female Agent (Michele Reis) who books his assignments and cleans up after his jobs."