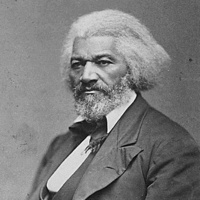 On Valentine's Day 2019, we invite you to a 201st birthday party for Frederick Douglass. Although Douglass was born into bondage and never knew his birthdate, he chose to celebrate every year on February 14. We will commemorate his birthday with cake and refreshments, read and discuss Black-authored texts by and about Douglass and his wife Anna Murray Douglass, and hear brief talks by scholars.

Frederick Douglass Day is a national celebration that we will join via LiveStream from the University of Delaware, Newark.

The theme of Douglass Day 2019 is Frederick Douglass’s life and legacy. This year's big event is a Read-a-Thon, focusing on one of Douglass's addresses to a Colored Convention in 1883, and a speech written by his daughter, Rosetta Douglass Sprague, as a tribute to her mother, Anna Murray Douglass.

The national event is cosponsored by the University of Delaware, the African American Museum in Philadelphia, and the Colored Conventions Project. More information on the national Frederick Douglass Day can be found at: http://coloredconventions.org/hbd.