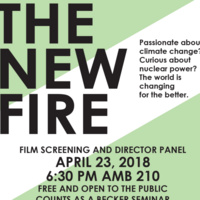 Free Screening of The New Fire and Director Panel

Join us for this special free screening of THE NEW FIRE at the University of Tennessee, Knoxville. Stay for discussion with director David Schumacher. Sponsored by the University of Tennessee, Knoxville Chapter of Women in Nuclear & UTK American Nuclear Society student chapter. In Alumni Memorial Building (AMB) 210. What can we do to mitigate climate change? Nuclear power has been vilified in popular culture and among much of the environmental community. Yet the next-generation reactors currently in development may actually be key to avoiding global catastrophe. The young entrepreneurs heading this energy revolution realize they’re up against more than the climate clock – they need to convince all of us thatthe new nuclear is safe and achievable.

Filmed across four continents over the course of 22 months, Emmy-winning director David Schumacher’s film focuses on how the generation facing the most severe impact of climate change is fighting back with ingenuity and hope. THE NEW FIRE tells a provocative and startlingly positive story about a planet in crisis and the young heroes who are trying to save it.

WHAT VIEWERS ARE SAYING
“With the urgency of transitioning to a low-carbon energy system, the debate over next-generation nuclear power takes on a special significance. The New Fire is the most important and captivating documentary film treatment of this issue. The film follows several young entrepreneurs on their quest for safe, flexible, and low-cost advanced nuclear technologies. Of great interest for all who are searching for solutions to the world’s climate-and-energy crisis.”
—Jeffrey Sachs, Professor, Columbia University

“Taming climate change is a momentous challenge that is going to require every zero carbon technology we can affordably deploy, and ‘The New Fire’ offers real hope that a new generation of nuclear technology can be part of that mix."
—Armond Cohen, Executive Director, Clean Air Task Force

“‘The New Fire’ shows us that the path to avoiding serious climate risk can be one of plenitude and prosperity rather than sacrifice and scarcity. All those who are truly serious about our future must see this film.”
— Kerry Emanuel, Professor of Atmospheric Science, MIT

“This film can be an icebreaker in terms of discussions about the future of nuclear technology.”
—Doug Vine, Center for Climate and Energy Solutions
“The film does a fantastic job explaining complex topics to
the audience.”
—Ball State Daily News