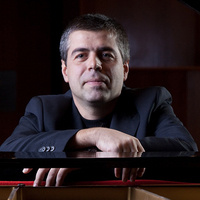 Prokofiev’s Ten Pieces can also be seen as a work involved in representation, but this time the music aims to render the story of a well-known play, Shakespeare’s Romeo and Juliet. Initially, Prokofiev is commissioned by the Bolshoi Theatre to write a ballet based on the play, but the ballet’s production is subsequently cancelled by the Stalinist government, a common occurrence of political censorship in the arts at the time. In response, Prokofiev penned the Ten Pieces for piano in order to be able to perform the music himself instead of relying on the government’s approval for orchestral performance. However, these pieces are not mere orchestral reductions, but pianistically conceived scene paintings, with a virtuoso pianist in mind since Prokofiev himself was a virtuoso performer.

Mussorgsky’s Pictures is a seminal work, both a precursor of and a crowning achievement of representation of painting in music. Pictures was written in 1874 and was inspired by an exhibition commemorating Mussorgsky’s close friend, painter and architect Victor Hartmann. The complex sound imagery and pianistic texture result in the creation of a series of short musical scenes or vignettes, each with its own particular character, representing a given painting through idiosyncratic musical means, while also encapsulating musical messages about Russian culture and mythology.

Livestream information can be found at https://music.utk.edu/events/live.php. Performers reserve the right to change their program without notice. Not all programs are determined prior to the performance. To view programs that have been set, click here.