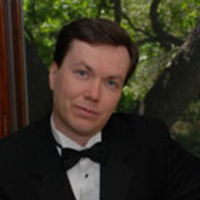 Piano; Mr. Gliadkovsky's performances have been met with great enthusiasm by both audiences and music critics in Europe, Russia and North America. Josef Woodard, a critic at the Los Angeles Times, wrote: "...the intensity and a nicely honed musicality left the audience stunned...enthralling...all in all, a gripping and masterful performance". “Fine dramatic sense…appealing range of emotional effects and pianistic devices…wonderful” writes Fort Worth Star-Telegram; “The most impressive…memorable… deep musician… fine interpretation” - Izvestia (Moscow, Russia). Since making his first public appearance in Moscow at the age of 6, Mr. Gliadkovsky has toured extensively on three continents performing piano and organ recitals and as a soloist with orchestras in various cities in Russia, including Moscow's prestigious Bolshoi, Maliy and Rachmaninoff Halls, St.-Petersburg Philharmonic's Glinka Hall, as well as in Italy, U.K., Poland, Mongolia, Canada, Japan and throughout the United States. The venues included Purcell Hall in London, Merkin Hall in New York, Jack Singer Hall in Calgary, Royce Hall in Los Angeles, Orange County Performing Arts Center in Costa Mesa, CA, Centers for the Arts in Scottsdale and Chandler AZ, National Gallery of Art and Catholic University in Washington, DC, 1st Congregational Church in Los Angeles, Philharmonic Hall in Poznan, Poland, and many others. He has performed at various music festivals, such as Aspen, Ventura, Music in the Mountains, Redlands Bowl festivals in the USA, Credomatic Festival in Costa Rica, Orfeo Festival in Italy, and worked with well-known conductors Pierre Boulez, Mehli Mehta, Gordon Johnson, John Farrer, Mischa Semanitzky, Patrick Flynn, among others. His CDs include 2 CDs for Alexei Records, 5 CDs for CMK Classics labels, as well as multiple broadcasts of his concerts on nationwide TV and Radio networks in USA, Russia and other countries.

Dr. Gliadkovsky combines his busy concert schedule with teaching at Saddleback College as a Professor of Piano and Director of Keyboard Studies. Prior to coming to Saddleback, he has been on the piano faculty at USC and Santa Monica College and served as the Head of the Piano Area at SUU (Southern Utah University) in Cedar City, UT. Mr. Gliadkovsky has been in demand as a masterclass artist-teacher, guest lecturer and piano adjudicator in piano competitions in Los Angeles, Las Vegas, Phoenix, San Francisco, Salt Lake City, Dallas, Columbus, Washington, D.C. and many other cities. His students have won prizes at various piano contests and have been accepted to schools such as USC, UCLA, Manhattan School of Music, Northwestern University, Peabody and San Francisco Conservatories, UCSB, UNT, SMU, BYU and USU, often with fellowship and scholarship awards. Dr. Gliadkovsky has given lectures and demonstrations at many music conferences, including the MTNA national and many MTA state affiliates, MTAC in CA and HUIC in Hawaii. He has recently published an article on artistic pedaling in California Music Teacher Magazine (March 2018) and an interview about piano technique (latest issue). In 2019 alone, he performed and gave masterclasses in TX, UT, LA, TN, OH, VA, NC, NH, NYC, in both Southern and Northern California, and at Orfeo Music Festival in Vipiteno, Italy, where he was on the piano artist faculty roster. Even during the turbulent 2020, he continued to perform both live and online, to teach masterclasses, adjudicate competitions and make recordings.

Kirill Gliadkovsky has also performed with various chamber music groups and in a family piano ensemble with his wife, Anna, and their two daughters, Anastassia and Sophia in numerous concert series in the United States, as well as at Orfeo, Credomatic and Aspen Festivals. He has collaborated with Chris Durrenberger in duo piano performances on many occasions throughout the years, as well.