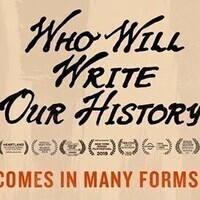 Join us as we observe International Holocaust Remembrance Day by participating in a worldwide screening event presenting Roberta Grossman's documentary Who Will Write Our History, adapted from the popular book about truth & resistance in the Warsaw Ghetto.

This single-screening event will be followed by a group discussion led by Holocaust scholar & UT professor Helene Sinnreich.

Led by historian Emanuel Ringelblum and known by the code name Oyneg Shabes, a clandestine group of journalists, scholars, and community leaders in the Warsaw Ghetto vowed to defeat Nazi lies and propaganda not with guns or fists but with pen and paper. Now, for the first time, their story is told in the documentary featuring the voices of three-time Academy Award nominee Joan Allen and Academy Award winner Adrian Brody.

located in the heart of Knoxville’s “Happy Holler” neighborhood, just one mile north of Downtown and easily accessible via I-275’s Baxter Avenue exit. Free street parking is available throughout the surrounding blocks.