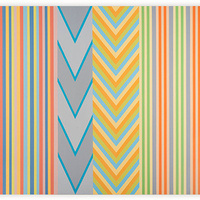 Since the 1970s, the work of James Little has been extensively exhibited in solo and group exhibitions throughout the United States and Europe. Among his awards and honors, Little has received the Joan Mitchell Foundation Award in Painting in 2009 and the Pollock-Krasner Award in 2000. In 2016, Little was commissioned by the Metropolitan Transit Authority to create public artwork for the Long Island Rail Road’s new Brooklyn-bound platform at Jamaica Station.