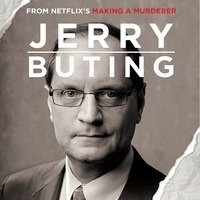 Jerry Buting was raised in suburban Indianapolis, one of seven children to devout Catholic parents during the shadows of the Vietnam War and the social unrest of the civil rights movement.

Jerry attended Indiana University and graduated with a BA in forensic studies and a minor in history, two subjects that would naturally prepare him for law school. He went on to pursue his law degree at the University of North Carolina at Chapel Hill. An internship at the U.S. Attorney’s Office in Washington, D.C. during law school provided a lasting insight and appreciation “for how good prosecutors approach their work with integrity and honesty,” – an experience that helped shape his career as a defense attorney.

Over the course of his career, Jerry worked on many high-profile cases while also serving as a frequent lecturer on DNA, computer crimes, and other forensic evidence. His reputation as a tenacious, talented defense attorney preceded his role as the co-defense attorney in the State v. Steven Avery murder trial in 2007. His performance throughout the trial and his efforts toward exposing both the shaky integrity of law enforcement and inherent flaws in the justice system came to national attention following Netflix’s popular documentary Making a Murderer.

However, in 2001, Buting’s greatest challenge wasn’t happening in the courtroom. It was in a local hospital where he spent a grueling year as he battled cancer. The aggressive treatments nearly cost him his life, tested his faith, and prompted exhaustive reflection on his vocation and life purpose. His wife and law partner, Kathy Stilling, managed both home and office workloads, as Jerry slowly recovered, determined to continue the fight. As with many cancer survivors, Jerry was provided with a new lens on life. Re-energized in his vocation, his focus would be on making a difference in people’s lives, “using the tools of mind, personality, and spirit given to me, for however long I could.”