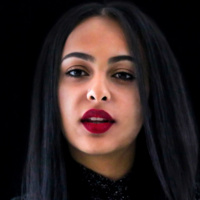 Jinahie (“my wings” in Arabic) is an Egyptian-American performance artist, educator, and social justice activist. Now in the fifth year of her national tour, Jinahie performs at colleges and universities across the country.

In the process, she has collected hundreds of Potluck Poems, a collaboration among strangers in which a poem is completed during live performances by the contribution of a line from each audience member.

Jinahie has performed at TEDxFoggyBottom, Sundance Film Festival, the U.S. Department of Education, United Nations, Smithsonian Institution, the Kennedy Center, and was a featured performer during a showing of the Pulitzer-Prize winning drama, Ruined, during which she had the honor of performing for Michelle Obama. Jinahie has shared the stage with the likes of Lupe Fiasco, The Roots, Smokey Robinson, Russell Simmons, and Angela Davis.