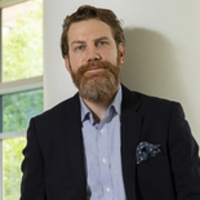 World Pictures: Outer Space and the Aesthetics of the Habitable

As an extension of his forthcoming book and related film project, James Merle Thomas will speak to the proliferation of "World Pictures" (Weltbilder) by examining the theoretical and historical dimensions of the habitable, a descriptive spatial term used since antiquity, and which opens onto a host of aesthetic, architectural, and ideological concerns throughout late modernity. At the crux of this lecture is a meditation on the study of habitable space during the Cold War—and specifically at the dawn of the 1970s—as the hallucinatory fever of the Apollo Era yielded to the Age of Aquarius, a moment when the utopian vision for dwelling in outer space was attenuated by the growing recognition of a rapidly uninhabitable Earth.

About: James Merle Thomas is an interdisciplinary scholar and curator whose work examines the art, visual culture, and technology of the twentieth and twenty-first centuries, and particularly, the aesthetics and politics of the Cold War. Central to his current research program are two interrelated projects: the first is a forthcoming book entitled Space Administration: NASA and the Aesthetics of the Habitable, which explores the intersections between abstract sculpture, architecture, design, and the aerospace industry during the height of a 1960s Space Race. The second project, a feature-length film currently in production and funded by the National Endowment of the Humanities, revisits NASA’s experimental underwater research station, established at the dawn of the 1970s off the coast of the U.S. Virgin Islands. Drawing on a series of experiments in art and technology from the late 1960s, Thomas’s lecture will chart what he terms an “aesthetics of the habitable”—an interdisciplinary concept that draws from abstract sculpture, graphic and environmental design, architecture, and engineering— in order to describe the historic and contemporary dimensions of dwelling in space.

Thomas is an Assistant Professor of Art History at the Tyler School of Art at Temple University, and Curator at the Philadelphia-based Slought, an interdisciplinary exhibition and research center affiliated with the University of Pennsylvania. He holds a doctorate in Art History from Stanford University.

Presented in conjunction with the McClung Museum's temporary exhibition, Visions of the End, on view from January 31 - May 10, 2020. Learn More.