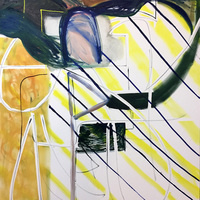 Fox Hysen was born in San Rafael, California, in 1982, received a MFA from Yale University in 2015, and BFA from New York University in 2006. Solo exhibitions include Gallery 16 in San Francisco, Lehtinen Gallerie in Berlin and Marcello Marvelli Gallery in New York. Hysen has been part of numerous group shows nationally and abroad including Capital and et al. in San Francisco, Basilica Hudson, New York, Kunsthaus, Bregenz, Austria, Kunstraum Kreuzber/Bethanien, Silberkuppe, Basso, all in Berlin, Germany among many others. She was also the recipient of the 2016 Tournesol award for painting by the Headlands Center for the Arts in Sausalito, CA.

“Hysen uses the surface of thepainting as a playing field for acting out narrative contradictions. A piece of newsprint or canvas pasted on seemingly haphazardly begins to behave like an image and vice versa images of artworks are reduced to scraps of paper. Through the use of collage and through the unexpected combination of materials and images she produces a diverse body of work that is both whimsical
and austere.”  —Gallery 16

Hysen’s work often oscillates between drawing, printing and painting via a collage modus operandi where making is shown to be thinking. Though historically, there is a tendency to procure specific and separate compartments to analyze each particle of such a triad, Hysen’s printmaking may act like painting and vice-versa, while drawing and collage may interchangeably construct a vertebrae wherein Hysen allocates a constant mode of reinvention and rumination.

“Often the hands will solve a mystery that the intellect has struggled with in vain.”            —Carl Jung

About the Artist-in-Residence in Painting & Drawing at UTK

The Artist-in-Residence Program was initiated in 1982. Each semester an invited resident artist teaches both undergraduate and graduate level courses in the painting and drawing curriculum. The AIR program has been highly successful in making a direct connection to the marketplace of ideas that surrounds art centers such as New York City, Chicago, and LA. The artists we bring to campus represent a spectrum of current sensibilities in painting and drawing holding sway in the art world today.

The AIR is integral to the core of the graduate student and undergraduate student experience, and adds significantly to the vitality and vibrancy of the dialectic engaged by the various faculty and students of the School of Art.