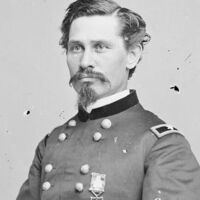 When the United States Army entered Knoxville in September 1863, riding alongside Gen. Ambrose Burnside was Capt. Orlando Poe.  An 1856 West Point graduate with the Corps of Engineers, Poe not only designed and coordinated the construction of the defenses of Knoxville; he was meticulous in his methods, record keeping and documentation.

Standing strong against a November 29 attack by the best assault troops of the Confederacy, Poe was proud of the fortifications at Knoxville.  He ordered the creation of detailed maps, employing Cleveland Rockwell and R.H. Talcott of the US Coast Survey to do original measurements. Only recently located at the National Oceanic and Atmospheric Administration (NOAA), the maps created display actual survey lines of sight used to locate specific military and civic features.

The army knew exactly where its forts were and documented those locations with precision. It is important to note that the army maps are topographical; that is, they record the elevation of the terrain of Knoxville.  All elements on the maps are located with three dimensions.

It was wonderful. Joan Markel shared so much information, answered questions, and talked with several people including myself after the lecture. The display of numerous maps was fascinating.