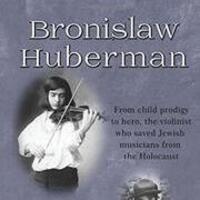 In conjunction with Violins of Hope, on view at the UT Downtown Gallery from January 4 – 27, 2019, the UT Downtown Gallery will be bringing journalist and lawyer, Peter Aronson, to give a lecture on his children’s book, Bronislaw Huberman, From Child Prodigy to Hero, the Violinist who saved Jewish Musicians from the Holocaust. Join us in the Hodges Library Auditorium at 3:30 PM on Thursday, January 24th.

I am an attorney, former journalist and, now, a children’s book author living in New York City with my wife, Emily, and two teenage daughters. I realized my kids were reading mostly fantasy, dystopian-themed novels. With the real world so rich with the good, the bad and the unbelievable, I found this to be sad. So I decided to start writing books for kids focusing more on the real world – either through biographies or novels with a strong dose of reality.

As an attorney, I have focused on assisting senior citizens with their problems. As a journalist, I mostly covered the law, including some of the biggest cases in the country: OJ Simpson, Rodney King and Bush v. Gore, the case that decided the 2000 presidential election.

Now, as I write children’s books, I am experiencing the same adrenaline rush I got as a journalist. I am writing biographies about truly extraordinary people – the Groundbreakers of the world. As for my Mandalay Hawk novels, unfortunately, the world faces too many monumental problems. Sometimes kids are the world’s best hope. KRAAP – Kids Revolt Against Adult Power. It’s part of a novel now. Someday, it may be reality.