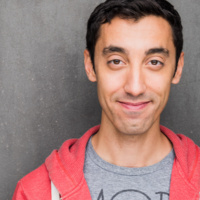 Join UT's Campus Events Board for a night of comedy and music with Morgan Jay!

Morgan Jay is a first generation American performer based out of Los Angeles.  Originally from New Jersey, he started his career in NYC where he attended the Tisch School of the Arts.  With over six years of stand up experience and an extensive background in music Morgan has managed to create a unique performance that touches comedy and music fans alike with his smooth melodies derived from his love for classic RnB and Bossanova. His face might be familiar since he has appeared in commercials for some of the biggest brands in the nation; Wendy’s, McDonalds, Toyota, Samsung and many more.

Jay has performed at the SF Sketchfest, Big Fire Festival, Iowa Comedy Festival, LA Comedy Festival and  won the Westside Comedy Showdow.  Morgan is a regularly featured artist for sofarsounds.com and this year won 1st Prize for best comedy/novelty song in the International Songwriting Competition which received over 16,000 submissions.