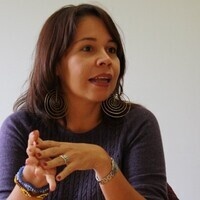 Nadia Celis, "Chronicle of a Terrible Love: Uncovering the secret story of the 'dishonored bride' in a classic of Latin American literature"

In 2022, four decades after the publication of Chronicle of a Death Foretold in 1981, and seven after the real crime that inspired it, the story of the “dishonored bride” remains alive in the imaginations of the millions of people who have read this most legible of Gabriel García Márquez’s works. Given Gabo's extraordinary talent for making reality and fiction indiscernible, The Chronicle has led to complex misunderstandings and elusive mysteries about the true crime that happened in Sucre in 1951. In an epilogue, eventually suppressed from the novel, Gabo suggested that the reconciliation of the spouses at the end of his novel had (like the actual history of the crime), a basis in reality. This presentation draws from a book-project inspired by the unpublished draft of Gabo’s Chronicle and other documents found in his personal archive (at the Harry Ransom Center at the University of Texas at Austin). Dr. Celis offers a tour of her process of discovering how real events became fiction, and how fiction influenced real people after the novel’s publication. Come hear more about her magical journey to discover the real woman behind one of Garcia Marquez’s best known novels.

Nadia Celis is an Associate Professor of Hispanic Studies and Latin American Studies at Bowdoin College in Maine. Her primary research interests are in Caribbean literature and culture, with an emphasis on issues of gender and sexuality. She is the author of Rebellion of the Girls: The Caribbean and the 'corporeal conscience' [La rebelión de las niñas: El Caribe y la “conciencia corporal"] (Madrid/Frankfurt, Iberoamericana Vervuert, 2015), winner of a Nicolás Guillén Award by the Caribbean Philosophical Association, an Honorable Mention for the Premio Iberoamericano by LASA, and the Premio Montserrat Ordóñez by LASA’s Colombia section. Celis is currently working on two book-length projects on the Colombian Nobel-Prize winning author Gabriel García Márquez.  Her most recent article from that project, "Between the 'atrocious crime' and the 'terrible love'; [“Entre el 'crimen atroz' y el 'amor terrible': Amor, poder y violencia en Crónica de una muerte anunciada de Gabriel García Márquez” won the 2018 Victoria Urbano Award for the best critical essay by the Asociación de Estudios de Género y Sexualidades [AEGS].