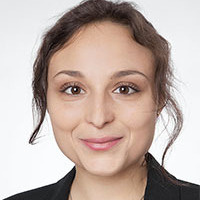 Abstract
One of the great challenges in fusion tokamaks is how to keep the core of a plasma hot enough that nuclear fusion can occur while maintaining a temperature at the edge of the plasma low enough that it doesn’t melt the tokamak’s walls. This requires dissipating the heat and particles flowing towards the wall without reducing the performance of the core. Techniques for reduction of power loads include radiative cooling by impurity seeding and optimization of the divertor. Results from both experiments and computational modeling from ASDEX Upgrade and DIII-D tokamaks are discussed. A core-edge integrated scenario developed by combining divertor optimization and impurity seeding is presented.

Bio
Livia Casali is a staff scientist in the field of nuclear fusion research at General Atomics and the leader of the core-edge integration area for the DIII-D tokamak in San Diego. Her work is focussed on core-edge integrated solutions with special emphasis on the role of radiative divertor and impurity behavior to achieve high performance operating scenarios with mitigated heat power loads which are essential for future fusion reactors. She works on both experiments and computational modeling. She led the first impurity seeding experiments in the newly installed slot divertor at DIII-D investigating the new findings with cutting-edge diagnostics and state-of-the-art computational tools. Her research has been highlighted by the US Department of Energy and featured in journal papers. She was also awarded the DIII-D Science Director Special Prize for an Exceptional Invited talk at the American Physics Society Conference APS-DPP in 2019.

Casali studied nuclear and subnuclear physics at the University of Rome Tor Vergata, Italy, and at the Albert Ludwig University of Freiburg, Germany. With a fellowship awarded by the German Academy Exchange, she performed her master thesis at the Max Planck Institute for Plasma Physics in Garching. She received her PhD from the Max Planck Institute for Plasma Physics in Garching and the Ludwig-Maximilian University of Munich. For her PhD work, she was awarded the EPS/PPCF prize at the European Physics Conference in Berlin 2014. From the Italian Physics Society she received the award for highly proficient scientific activity entitled to “Pietro Blaserna,” the founder of the Italian Physics Society.