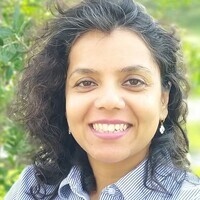 Abstract
In this talk, a new mechanism for detecting reactor antineutrinos based on coherent-elastic-ν-nucleus-scatter (CEνNS) will be discussed. Antineutrinos are released from the beta decay of fission products and can provide important information about reactor operation. Prior studies have illustrated that antineutrinos can be used to determine the reactor power (rate of fission), composition of the reactor (amount of uranium, plutonium), and the age of the fuel (beginning/end of cycle and cooling time). However, these particles are extremely evasive and suffer from very poor rates of detection. The existing state-of-the-practice based on inverse-beta-decay (IBD) detectors deploy large ton-kiloton scale detectors. The IBD reaction mechanism has an intrinsic threshold of detection of 1.806 MeV and its microscopic cross-section varies from 10-43 cm2 to 10-43 cm2 between 2 MeV and 8 MeV. In contrast, the CEνNS reaction has no intrinsic threshold but it is limited by the threshold of the charge collection process, i.e. detection of the energy deposited in the detector. The microscopic cross-section for CEνNS reaction is 10 to 100 times larger than that of IBD, depending on the antineutrino energy and the type of detector material used. In this talk, calculations of response from germanium and silicon based CEνNS detectors will be shown with a threshold of detection of 20-eV nuclear recoil. A 20-eV nuclear recoil can provide a threshold of detection of 0.82 MeV in Ge and 0.51 MeV in Si. The response has been calculated for a 1-MW research reactor located at Texas A&M University. In terms of reaction rates, an improvement of over 20 times with Ge based CEνNS detectors, and over 4 times with Si based CEνNS detectors over the existing IBD detectors can be achieved. Thus, the CEνNS detectors can be the next generation of antineutrino detectors providing improved efficiency, smaller sizes, and better sensitivity to the reactor antineutrinos spectrum.

Prasad serves as the Primary advisor of the Women-in-Nuclear Section at TAMU. She is an active member of the American Nuclear Society (ANS) and is the recipient of the 2017 ANS Young Member Excellence Award. She has served as the academic adviser for the student chapters of the Institute of Nuclear Materials Management and the Indian Nuclear Society at IIT–Kanpur. Prasad served as the Chair of the ANS Local Sections Committee 2016-2017 and 2019-2021.