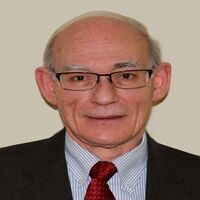 Abstract:
A growing number of metallic alloys have been discovered that can be synthesized as amorphous phases either during rapid melt quenching or by slow cooling of bulk volumes. In these systems crystallization reactions are effective in yielding nanoscale microstructures. For example, with amorphous Al alloys crystal densities can reach levels of 1022 -1023 m-3. The crystallization kinetics determinations support a heterogeneous nucleation, but it is also evident that the kinetics are affected by transient effects. The initial nucleation appears to derive from quenched-in atomic arrangements to yield a high nucleation number density. The decaying growth rate at long time can be related to the impingement of diffusion fields from neighboring nanocrystals, but other factors may operate at short times. Along with the advances in basic understanding of alloying to promote vitrification, there is a recognition that the structural models of amorphous alloys require refinements to account for local interactions and nanoscale heterogeneities that represent short range order as well as the development of medium range order. These are important issues that impact the analysis of the crystallization behavior during devitrification and the amorphous phase thermal stability. Beyond crystallization reactions, nucleation is critical for promoting useful ductility for structural applications of bulk metallic glasses. In this case, plastic deformation is concentrated in a narrow shear band that propagates rapidly. By promoting copious shear band nucleation throughout the volume of a bulk metallic glass, a more homogeneous deformation can be realized along with a useful ductility. The study and analysis of nucleation reactions for these different situations requires a consideration of the stochastic nature of nucleation and the influence of heterogeneous sites. These are new developments that offer exciting possibilities for control of nanoscale microstructures and deformation behavior as well as challenges for the fundamental understanding of the reaction mechanisms.

Biography:
Professor John H. Perepezko is the IBM-Bascom Professor of Materials Science and Engineering at the University of Wisconsin-Madison. His honors and awards include the ASM Bradley Stoughton Award, Fellow of ASM, AGARD Visiting Lectureship, the Alexander von Humboldt Stiftung Forschungspreise, the TMS Bruce Chalmers Award, TMS Fellow, National Academy of Engineering, JSPS Fellow, TMS W. Hume-Rothery Award, MRS Fellow, Adjunct Professor–Tohoku University, Sendai, Japan and the Tokyo Institute of Technology and the Helmholtz Gemeinschaft International Fellow Award. He has served on several National Research Council committees and advisory panels for NASA, DOD and DOE. He is on the Editorial Board of International Journal of Powder Metallurgy and Intermetallics. His research interests include transformation behavior and microstructure/property relationships during materials processing, intermetallic alloys, coatings, phase stability, modeling and materials design. He has authored or co-authored over 400 publications and holds 15 patents.