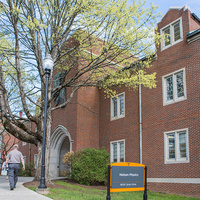 Abstract:
Neutron stars are composed of the densest observable matter in nature and occupy the intellectual frontier between astrophysics, nuclear physics, and, now, gravitational physics. Current and planned nuclear experiments on heavy nuclei and observations of neutron stars in both electromagnetic and gravitational waves will be exploring the nature of dense matter from complimentary approaches. Many observed neutron stars accrete hydrogen- and helium-rich matter from a companion star. During the slow compression to nuclear density the accreted matter is transmuted from being proton-rich to being proton-poor. These reactions affect many observable phenomena — from energetic explosions on the neutron star’s surface to cooling of the surface layers — that in turn inform us about the nature of the deep interior of the neutron star. In this talk, I shall describe what recent astronomical observations and nuclear physics experiments are telling us about the nature of matter at nuclear densities.