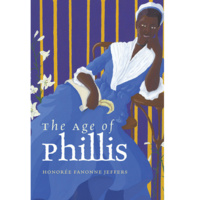 Don’t miss our next Public Books Circle meeting, when Professor Katy Chiles will lead a discussion about Honorée Fanonne Jeffers’ book The Age of Phillis!

In 1773, a young, African American woman named Phillis Wheatley published a book of poetry that challenged Western prejudices about African and female persons. Based on fifteen years of archival research, The Age of Phillis imagines the life and times of Wheatley: her childhood in the Gambia, West Africa, her life with her white American owners, her friendship with Obour Tanner, and her marriage to the enigmatic John Peters. Woven throughout are poems about Wheatley's "age"—the era that encompassed political, philosophical, and religious upheaval, as well as the transatlantic slave trade. In verse, we see Wheatley as not simply a racial or literary symbol, but a human being who lived and loved while making her indelible mark on history.

Honorée Fanonne Jeffers is a poet, novelist, critic and scholar. Her books include The Gospel of Barbecue (2000), a 2001 Paterson Poetry prize finalist; The Age of Phillis (2020); The Glory Gets (2015); Red Clay Suite (2007); and Outlandish Blues (2003). She has won fellowships from the American Antiquarian Society, the Bread Loaf Writers Conference, the National Endowment for the Arts, the Vermont Studio Center, and the Witter Bynner Foundation through the Library of Congress. She was elected to the prestigious American Antiquarian Society and was awarded two lifetime achievement notations for her creative writing: the Harper Lee Award for Alabama's Distinguished Writer of the Year, and induction into the Alabama Writers Hall of Fame. Professor Jeffers has taught at the University of Oklahoma since 2002.

Our Public Books Circle meets online twice a month and is free and open to the public. Each of our sessions is led by a UT professor, and everyone is welcome to add their voice to the discussion!