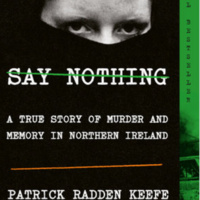 Public Books Masterclass: Say Nothing: A True Story of Murder and Memory in Northern Ireland

The UT Humanities Center and Union Ave Books are partnering to host a free Public Books Masterclass about the novel Say Nothing: A True Story of Murder and Memory in Northern Ireland, by Patrick Radden Keefe. "Zoom in" with Dr. Monica Black, UTK associate professor of history, to participate in a discussion of the novel!

Say Nothing takes on the bitter mid-century conflict in Northern Ireland. In December 1972, Jean McConville, a thirty-eight-year-old mother of ten, was abducted from her home, one of the most notorious episodes of the vicious conflict known as The Troubles. The brutal violence seared the McConville children but also members of the I.R.A. The nonfiction book conjures a world of passion, betrayal, vengeance, and anguish; it won the National Book Critics Circle Award for Nonfiction, was a New York Times Top 10 Book of the Year, and was longlisted for the National Book Award.

Called by Rolling Stone an “obsessive reporter and researcher, a master of narrative nonfiction,” Patrick Radden Keefe is an award-winning staff writer at The New Yorker magazine and the author of three books. He received the National Magazine Award for Feature Writing in 2014, and was a finalist for the National Magazine Award for Reporting in 2015 and 2016. Winner of Guggenheim and Wilson Center fellowships, he is also the host of Wind of Change, an 8-part podcast series on espionage and music.

Monica Black is an associate professor of history at the University of Tennessee, Knoxville and researches the history of modern Europe. She is the co-editor of the journal Central European History and is the author of Death in Berlin: From Weimar to Divided Germany; her new book, A Demon-Haunted Land: Witches, Wonder Doctors, and the Ghosts of the Past in Post-WWII Germany, will be published this fall.

This free and public book discussion is part of a new partnership between the UT Humanities Center and Union Avenue Books, downtown Knoxville’s Independent Bookstore. The Public Books Masterclass meetings feature a UT faculty expert who will lead the discussion and provide key insights on texts. Check out our entire series discussion schedule at the , on UTHC social media, or at Union Ave Books media sites or their weekly newsletter.

Registered participants will be sent a link to the Zoom discussion.