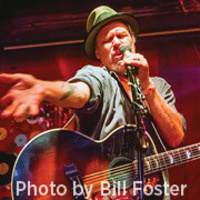 Singer-songwriter-poet-playwright RB Morris will perform at UT’s John C. Hodges Library on Thursday, April 4. His appearance will feature the first public performance of an original song inspired by materials in the UT Libraries’ James Agee archives.

A reception in the Jack E. Reese Galleria begins at 5:30 p.m., followed by a performance in the Lindsay Young Auditorium at 6:30 p.m. The event is free and open to the public.

The occasion is part of a unique program sponsored by the UT Libraries. Boundless: Artists in the Archives was launched in 2017 as a way to highlight the exceptional materials available in the Betsey B. Creekmore Special Collections and University Archives. Artists such as Morris are invited to explore manuscripts, personal papers, and other primary sources in the archives and to translate their insights into the language of their craft.

RB Morris has long expressed a kinship with Knoxville-born writer James Agee. Morris—a poet and playwright as well as a performer and recording artist (blues, folk, rock)—has invoked Agee’s name in songs and poems. In 1992, he wrote and acted in The Man Who Lives Here Is Looney, a one-man play taken from the life and work of Agee. The play has since been reprised at—among other venues—the Knoxville Museum of Art and the Cornelia Street Café in Greenwich Village.

Like Agee, Morris was born in Knoxville’s Fort Sanders neighborhood. He first heard of the author in the early 1960s when Hollywood came to Knoxville to film an adaptation of Agee’s autobiographical novel, A Death in the Family. Morris was instrumental in founding the James Agee Park in Fort Sanders, dedicated in 2005 during a citywide Agee celebration.

From 2004 to 2008, Morris served as the Jack E. Reese Writer in Residence at the UT Libraries, and in 2009 Morris was inducted into the East Tennessee Writers Hall of Fame. In 2016 he became Knoxville’s first Poet Laureate.

UT’s Special Collections holds the largest and perhaps most significant collection of James Agee material in the world. Among the archives are hundreds of letters to and from Agee as well as drafts of published and unpublished manuscripts, including draft scripts for The African Queenand Agee’s original manuscript for A Death in the Family, which differs significantly from the heavily-edited version published following Agee’s death.