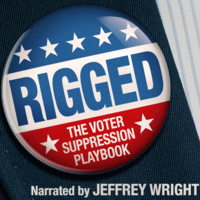 The film, a theatrical documentary, is narrated by Emmy Award-winning actor, Jeffery Wright, and investigates how voter suppression laws in many states make it harder for minority groups and young people to vote.

This event will be Monday, November 4th from 4:00-6:00 pm in the Toyota Auditorium and is free and open to the public. Guests may park for free in the Vol Hall Garage by requesting a parking voucher from Baker Center staff at the event.