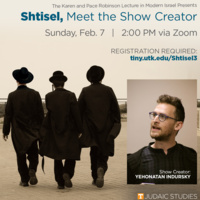 The award winning Israeli television series Shtisel which also streams on Netflix has enjoyed international popularity. The show follows the lives of a family of ultra-Orthodox Jews (in Hebrew, haredi) living in Jerusalem. The show’s universal themes – family dynamics, love, and loss – are in part responsible for its popularity.

Meet the show creator: Yehonatan Indursky, one of the show’s co-creators, was raised in an ultra-Orthodox family in Jerusalem. Award-winning writer and director, Yehonatan Indursky wrote and created, with Ori Elon, the esteemed drama series Shtisel, which won 17 Israeli Academy of Television awards. The series is currently an international hit on Netflix. His full-length documentary Ponevezh Time, was nominated for Best Documentary Film at the Israeli Academy Awards. Driver (2018), his first full-length film, won the Israeli Critics Award. Indursky wrote and directed the series Autonomies, which received rave reviews and won Reflet d'Or for "Best International Television Series" in Geneva International Film Festival. Autonomies imagines an ultra-Orthodox autonomy in Jerusalem that is surrounded by a wall, and operates strictly in accordance with Halachic laws. Indursky's short film The Cantor and the Sea, won best director in the Jerusalem Film Festival 2015.

Register in advance for this meeting. After registering, you will receive a confirmation email containing information about joining the meeting.