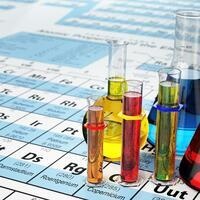 Abstract:   A reliable method to design site-isolated metal catalysts is through the synthesis of intermetallic bulk compounds where a small number of active atoms are isolated in an inert matrix of a second metal.  Unlike alloys, intermetallics have long range periodic atomic order and are more likely resistant to surface segregation effects making them an ideal system for defining the nuclearity (size) and composition (binary versus ternary) of the active site.  We will demonstrate carefully chosen intermetallic systems enable the most rigorously defined metal-based active site known in heterogeneous catalysis (A bold statement for sure, but at the end of this presentation, I hope you will agree!).  The Pd-(M)-Zn γ-brass phase (M = Zn, Pd, Cu, Ag, Au) uniquely enables the synthesis of Pd-M-Pd active ensembles with controlled nuclearity and composition isolated in a Zn matrix.

The prototypical Pd8Zn44 structure contains only isolated Pd atoms, but as the Pd concentration is increased by Zn substitution (Pd8+xZn44-x, x = 0-2) within the bounds of the γ-phase, a fixed number of Pd-Pd-Pd trimers form in the bulk.  These multi-atomic heteronuclear active sites are catalytically distinct from Pd single atoms, fully coordinated Pd and differ within the Pd-M-Pd series.  With these catalysts, we quantify the unexpectedly large effect of active site nuclearity for acetylene semi-hydrogenation in an ethylene and hydrogen rich environment.  The trimer-containing Pd9Zn43 and Pd10Zn42 have ~1000 times higher activity compared to trimer-free Pd8Zn44, but the latter leads to net ethylene gain by selectively hydrogenating acetylene, consistent with theoretical predictions.  Pd2M trimers demonstrate activity and selectivity intermediate to Pd monomer- and trimer-containing surfaces.  Experimental trends show strong agreement with DFT predictions, evidencing our ability to control the nuclearity and composition of active sites via an intermetallic phase.

We further demonstrate the well-defined active site afforded by intermetallics allows for the development of microkinetic models that rigorously capture apparent activation energies and reaction orders for ethylene hydrogenation on g-brass Pd-(M)-Zn.  Previous studies investigating the kinetics of ethylene hydrogenation on late transition metal surfaces have required the use of a “special” site on which H* can adsorb without competition from ethylene within a Langmuir-Hinshelwood framework.  The molecular level definition of such sites is elusive, arising from the complex combination of mixed coverages and difference in adsorbate size between ethylene and hydrogen.  The isolation of Pd1 and Pd3 sites allows us to provide precise definition of all possible ethylene-hydrogen co-adsorption structures and hydrogenation reaction paths, elucidating a precise definition of the site requirements.  The Pd3 trimer has a turnover frequency three orders of magnitude higher than the Pd1 monomer, with the trimer offering enough adjacent Pd atoms to allow ethylene and hydrogen co-adsorption and stable hydrogenation transition states.  DFT-based microkinetic modeling predicts an ethylene reaction order close to zero and hydrogen order of unity, in agreement with experimental results.

Bio: Robert (Rob) M Rioux is the Friedrich G. Helfferich Professor of Chemical Engineering and Professor of Chemistry at the Pennsylvania State University.  Prior to joining the Pennsylvania State University in 2008, he was a National Institutes of Health Postdoctoral Fellow at Harvard University in the Department of Chemistry and Chemical Biology.  He received his Ph.D. in physical chemistry from the University of California, Berkeley in 2006.  He holds a B.S. and M.S. degree in chemical engineering from Worcester Polytechnic Institute and the Pennsylvania State University, respectively.  He has received a number of awards, including a DARPA Young Faculty Award, an Air Force Office of Scientific Research Young Investigator Program Award, a NSF CAREER Award and a 3M Non-Tenured Faculty Award.  At Penn. State, he has been recognized for his research (Pennsylvania State Engineering Alumni Society (PSEAS) Outstanding Research Award, 2014), teaching (PSEAS Outstanding Teaching Award, 2018) and advising (Pennsylvania State University Excellence in Advising Award, 2014) efforts.  His group’s current research focuses on the development of spatially- and temporally-resolved spectroscopic techniques for imaging catalytic chemistry, elucidation of reaction mechanisms in nanoscale systems, the development of solution calorimetric techniques to understand catalytic processes at the solid-liquid interface and the design of active sites in metal-based catalysts with a particular emphasis on intermetallic and single atom catalysts.