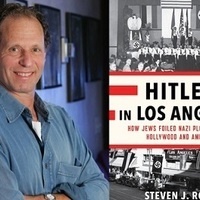 Professor Steve Ross from the History Department of the University of California will lecture from his recent book, Hitler in Los Angeles: How Jews Foiled Nazi Plots in Hollywood and America, which was a finalist for the National Book Award in History.  Based on extensive research in previously unexamined archival material, the book tells a compelling story of how a small group of people spied on and helped prevent plots hatched by Nazi sympathizers in the Los Angeles area during the Depression and early years of World War II.