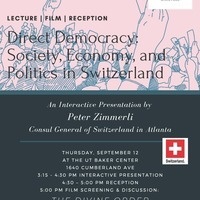 Knoxville, Tennessee - Students are encouraged to participate in a series of events focusing on Switzerland on Thursday, Sept. 12th from 3:15 to 6:45 pm at the Howard H. Baker Jr. Center for Public Policy, located at 1640 Cumberland Avenue in Knoxville, TN.

A half-hour reception for all those in attendance will be held immediately following Consul General Zimmerli’s presentation in the rotunda on the first floor of the Baker Center, starting at 4:30 pm.

At 5:00 pm, following the reception, there will be a screening of the acclaimed 2017 Swiss movie The Divine Order, directed by Petra Volpe. This 96-minutes movie in Swiss German with English subtitles, tells the powerful story of a young Swiss housewife that publicly advocates for women's suffrage in 1971. This series of Swiss-focused events will conclude with a brief discussion of the movie The Divine Order with Consul General Peter Zimmerli.

Hosted by the Department of Modern Foreign Languages & Literatures, the Center for Global Engagement and the Howard H. Baker Jr. Center for Public Policy, these events are part of Zimmerli’s first visit to the University of Tennessee, Knoxville. All events are free and open to the public.

Born in 1957 in Switzerland, Zimmerli grew up in the canton of Aargau. He graduated with a Commerce Diploma and holds a Diploma in Advanced Studies in International Relations.

Zimmerli joined the Swiss Ministry of Foreign Affairs in 1985. Prior to his arrival in Atlanta in August 2017, Zimmerli has lived and worked in Switzerland, Brazil, the Democratic Republic of Congo, Germany, Italy, and Singapore.

As the current Consul General of Switzerland in Atlanta, his jurisdiction is over the States of Alabama, Arkansas, Florida, Georgia, Louisiana, Mississippi, North Carolina, Oklahoma, South Carolina, Tennessee, Texas, as well as the Cayman Islands.

He speaks German, French, English, Portuguese, Italian, and Spanish. He is married to his wife Jun Cui and has two children.

During Zimmerli’s visit, the exhibition “Mapping 'Knoxville' Across Time, Media, and Cultures: Tracing Unexplored Connections Between the Work of Cormac McCarthy, Annemarie Schwarzenbach, and Buddy and the Huddle” will be on display on the first floor of the Howard H. Baker Jr. Center for Public Policy.

Engaging and thoroughly enjoyable. The presentation and then polling using Kahoots was very informative. I thought the film, Die goettliche Ordnung, was super at depicting the 1970's in Switzerland and had a number of moments of humor.