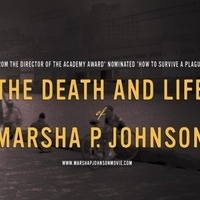 The Death and Life of Marsha P. Johnson screening

Join the Pride Center for a screening of the Netflix original documentary The Death and Life of Marsha P. Johnson. From Netflix: "As she fights the tide of violence against trans women, activist Victoria Cruz probes the suspicious 1992 death of her friend, Marsha P. Johnson." We will screening the documentary and hold a short discussion afterward. View the trailer here: https://www.youtube.com/watch?v=pADsuuPd79E
Marsha P. Johnson (August 24, 1945 – July 6, 1992) was an American gay liberation activist and self-identified drag queen. Known as an outspoken advocate for gay rights, Johnson was one of the prominent figures in the Stonewall uprising of 1969. A founding member of the Gay Liberation Front, Johnson co-founded the gay and transvestite advocacy organization S.T.A.R. (Street Transvestite Action Revolutionaries), alongside close friend Sylvia Rivera. A popular figure in New York City's gay and art scene, Johnson modeled for Andy Warhol, and performed onstage with the drag performance troupe Hot Peaches. Known for decades as a welcoming presence in the streets of Greenwich Village, Johnson was known as the "mayor of Christopher Street". From 1987 through 1992, Johnson was an AIDS activist with ACT UP.
This event is part of Black History Month 2020 at UTK.